When are you planning to visit?

Paisley’s –Best-Kept-Secrets. The Life of Robert Tannahill, & Canal Walkway Guide Walking Tour, 50″minThe Canal Walk will commemorate the 85 souls that drowned in the Glasgow-Paisley-Ardrossan Canal when the pleasure boat the Countess of Eglinton capsized in the Paisley Canal basin. 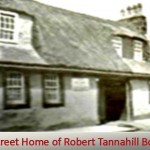 Robert Tannahill was born at Castle Street in Paisley on 3rd June 1774, the fourth son in a family of seven. Soon after his birth the family moved to a newly built cottage in nearby Queen Street. 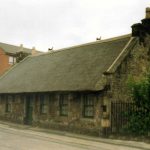 In 1775, James Tannahill acquired Bailie Slater’s steading in Queen Street and erected upon it a one-storey thatched cottage with a passage through the centre, the north side being occupied as a dwelling-house and the south side as a four-loom weaving shop.

James Tannahill was a very accurate individual and he kept an account of the whole cost of the building which has been preserved in his note pocket book to the present day. The building of the house was one of the important acts in the life of James Tannahill.  The house was built at a cost of £60.16. 4.

In his thirteenth year, Robert Tannahill was appointed an apprentice to the weaving trade; with his father and was entered into The Weavers’ Society in 1786.

Robert’s loom was facing the front door of the loom shop. By the side of his loom he had a rosewood box with paper and pen and a German flute.

Robert would take note of all visitors to the cottage and write lyrics for his poetry and play songs on his flute while the shuttle clicked and the loom whirred, he turned it all to rhyme and music. Tannahill was a lover of nature and he found its beauty and Inspiration from the “Fairy Woodside”, “Sweet Ferguslie”, And “The Braes of Gleniffer”,

The Poet’s Love Story: Robert’s sweetheart was Janet Tennant, whose parents came from Dunblane “Robert and Janet were together for some years; Robert wrote a song for Janet… “Jessie, The Flower o’ Dunblane”

Robert was not keen on dancing due to his lameness and asked a friend to take Janet to The Weavers Summer Annual Ball; he enjoyed the company of Janet, when parting company he plighted Janet with a kiss.

When Robert saw this his heart was broken and knowing it would be the last, he would see of his sweetheart Janet his “Jessie, The Flower o’ Dunblane Robert went home and wrote a heartbroken love poem…

THE FAREWELL.
Air—Lord Gregory.
Accuse me not, inconstant fair, Of being false to thee,
For I was true, would still been so, Had’st thou been true to me :

But when I knew thy plighted lips
Once to a rival’s prest,
Love-smcther’d independence lose. And spurn’d thee from my breast.

The fairest flow’r in nature’s field Conceals the rankling thorn ;

So thou, sweet flow’r ! as false as fair, This once kind heart hast torn :

‘Twas mine to prove the fellest pangs
That slighted love can feel;
‘Tis thine to weep that one rash act, Which bids this long farewell.

Residence in Bolton In 1799 Robert left Paisley and went to find work in Bolton with his brother Hugh. 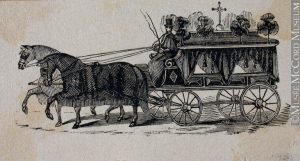 His Father’s Death After remaining in England for two years the brothers received word that their father’s health was rapidly declining. In winter 1882 the two brothers retuned to Paisley and gathered with other members of the family around the death-bed of their father. Later that year his brother Hugh got married shortly after the death of his father and Robert remained with his mother in the cottage in Queen Street.

Friends of Tannahill: Robert had many friends the most outstanding of these being William McLaren, Robert Archibald Smith, William Motherwell and a family friend Peter Burnet…

Music: Robert Archibald Smith was the composer of melodies to the lyrics of Robert Tannahill and other musical friends, John Ross of Aberdeen and James Barr of Kilbarchan.

Robert Tannhill’s Last Days: On March 1810 Robert sent his volume of new songs to Mr Archibald Constable, Edinburgh. The publisher returned the parcel to Tannahill without examining its contents saying that he had too much work on and could not print any more that year. Robert went into depression and went to destroy all of his work.

Tannahill’s Death: On the 17th May 1810, Tannahill walked to Glasgow and called on his friend Alexander Borland, with whom he had a long conversation; the poet was so incoherent in what he said that Borland thought it prudent to see him safely home to his dwelling in Queen Street Paisley.,

They hastened to their mother’s house, to find that Robert had returned to rest. James and Matthew wished to remain overnight, as they were anxious as to Robert’s condition; but their mother reassured and advised her sons to go back to their own homes and she would see to Robert herself, which they accordingly did.

During the night the mother had unconsciously dropped into sleep and was awakened by a slight noise and found Robert’s bed empty.  Robert’s mother at once sent for James and Matthew and also for (Black Peter) Peter Burnet “Peter was a friend of the family.” Instantly a search for Robert was formed.

Peter on enquiry learned that a small-sized man had been seen hurrying from Queen Street across George Street westward.  Peter made for the Brediland Road and soon found the poet’s coat and silver watch on the south side of the culvert of the Candren Burn.

Under the canal was the lifeless body of Robert Tannahill’s body was recovered and taken back to the house in Queen Street.   Robert is buried in the family liar West Relief Churchyard in Paisley.  The Castlehead graveyard is the resting place for all the Tannahill family. The Tombstone was erected at the Poet’s grave, 1886